Luigi Ontani is one of the protagonists of the art scene over the last four decades. He is a multifaceted figure who uses various forms of expression, from sculpture to painting and from photography to performance.
The title of the exhibition “IdeTriBali” is a portmanteau word; a combinatorial word that adds meaning to meaning. “IdeTriBali” contains four words: Idea, Ideali (Ideal), Tribal and Bali. The title underlines the intense mental and physical, and therefore “tribal,” collaboration that the artist had with the local Balinese community. The use of portmanteau words in Ontani’s artistic practice confirming the importance of his titles, which are not simply playing with words, but rather responding and corresponding to the need for a hybrid figuration, highlighting an essential part of his research.
In these works Ontani continuously changes identity, giving life to controversial and ambiguous figures, sometimes with an ironical or vaguely kitschy tone. The transformation of Ontani’s body has been sustained by the use of the mask. For the artist, the mask is an emblem and a metaphor, an object that “doesn’t completely cover; it brings along others symbols that our senses cannot express.” The mask is the main tool for Ontani’s witty exploration of what lies beyond his own personality; his interest in the mask began in the ’70s and it is related to his fascination with the Commedia dell’arte and its characters. In the early ’80s his research on masks brought him to travel throughout the world and led him to identify himself with cultural expressions in Tyrol, Lecce, Venice, Faenza, Vietri, Burkina Faso, Mali, Mexico, New Mexico, Guatemala, Japan, Yemen, Nepal, India, Sri Lanka, Cambodia, Indonesia, and Bali.
In Bali the artist has been collaborating with the excellent local artisans Ida Bagus Anom, Tangguh I Wayan, his son Sukarya and Made Lopang, who craft his masks in pule wood since 1981. Ontani’s interest in Balinese culture gives him the possibility to mix his personal artistic practice with the tradition of Balinese art. Following these premises, Ontani, alongside Lucie Fontaine’s employee in Bali, developed the exhibition as a response to the surrounding environment and for this occasion the exhibition will not only take place in Kayu’s space but in all the six Joglos* of the Rumah Topeng Dan Wayang compound**, juxtaposing its permanent historical collection to Ontani’s exhibition, which will include a selection of Ontani’s new masks and wayang kulit, as well as projections of Tableaux Vivant and four new performances that will happen on different areas of the compound: Ogoh-ogoh, Music Performance, Tavolozza RifioRITO, and Wayang Kulit. 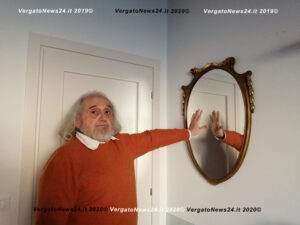